Returns as of 12/20/2021
Returns as of 12/20/2021
Founded in 1993 by brothers Tom and David Gardner, The Motley Fool helps millions of people attain financial freedom through our website, podcasts, books, newspaper column, radio show, and premium investing services.
Micron Technology (NASDAQ:MU) stock has popped impressively since the middle of October thanks to changing sentiments on Wall Street, as analysts now expect the memory market to remain healthy in the wake of strong personal computer (PC) and server sales.
This is a notable turnaround for Micron considering that the stock has been hammered for most of 2021. The market assumed that memory demand would fall, resulting in oversupply and causing a memory price bust that would hurt Micron. However, that has not been the case. 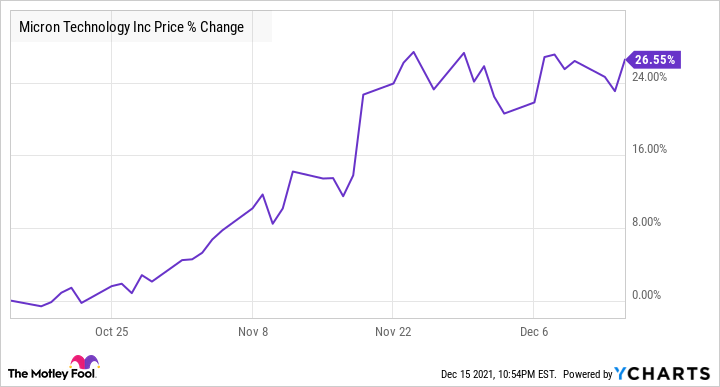 MU data by YCharts.
Micron expects memory demand to remain strong in the long run, which has encouraged the company to open its wallet and pour $150 billion into shoring up production capabilities, and research and development over the next decade. This move, along with positive Wall Street sentiment, has sent Micron stock soaring.
However, there are still a few lingering concerns about the health of the memory market that could send Micron stock stumbling once again. With the company set to release its fiscal 2022 first-quarter results on Dec. 20, investors may be of two minds as to what they should do with Micron stock — sell and avoid any potential losses, or buy before it gets more expensive. Let’s see which of these two options may be the right one for investors heading into Micron’s earnings report.
Memory industry market research provider TrendForce projects that the DRAM (dynamic random-access memory) market is set for difficult times ahead on account of weak demand. The firm estimates that prices of DRAM could drop between 3% and 8% in the current quarter over the previous one, followed by a more substantial drop of 8% to 13% in the first quarter of 2022.
TrendForce said it believes weak pricing will be triggered by a drop in demand across the PC, server, mobile, consumer, and graphics cards markets as procurement slows down and oversupply sets in. For comparison, DRAM prices had reportedly increased 3% to 8% quarter over quarter in the third quarter of calendar 2021.
Image source: Getty Images.
Now, this looks like bad news for Micron Technology since it gets 74% of its revenue from the DRAM market. A sizable drop in DRAM prices is likely to knock the wind out of the company’s sails, as this segment has been the driving force behind its growth. In the fourth quarter of fiscal 2021, Micron’s DRAM revenue was up 39% year over year to $6.1 billion. For the full fiscal year, Micron witnessed a 38% spike in DRAM revenue to $20 billion, which represented 72% of its total annual revenue.
The impressive spike in DRAM revenue was driven by a combination of higher shipments and stronger pricing. So, Micron has a lot to lose from a slowdown in this market. This is the reason investors who are wary about the company’s near-term prospects may want to offload the stock after its latest rally, which has put Micron in positive territory after a terrible performance for most of the year. 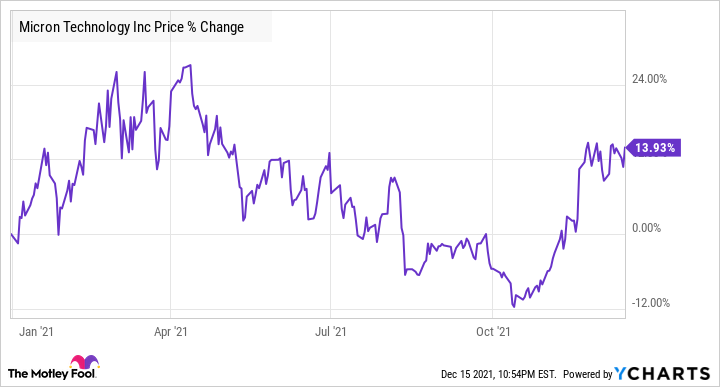 MU data by YCharts
Micron’s fiscal 2022 first-quarter guidance shows that it won’t be running out of steam. The company anticipates $2.10 per share in adjusted earnings on revenue of $7.65 billion this quarter, while the non-GAAP gross margin is expected to land at 47%. These numbers point toward a huge improvement over the prior-year period.
Micron had earned $0.78 per share in the first quarter of fiscal 2021, indicating that its earnings could increase 169% year over year at the midpoint of the guidance range. Additionally, the company’s revenue is on track to jump 32% year over year from $5.77 billion in the year-ago quarter.
It is worth noting that Micron’s fiscal first quarter covers the three-month period from September to November, so any weakness in DRAM prices would be reflected in the company’s results. However, the guidance suggests that the prices will continue to remain strong, and recent Wall Street chatter indicates that the demand from the PC, server, and smartphone markets will remain robust next year.
Analysts estimate that Micron’s revenue could increase 15% in fiscal 2022, followed by a 16% jump in fiscal 2023. What’s more, the company’s earnings are expected to jump 45% this fiscal year and 24% in the next one. Micron’s five-year annual earnings growth forecast of 22% is also healthy, which isn’t surprising given the booming memory demand anticipated in the coming years.
That’s why investors who haven’t bought Micron stock yet could consider going long since it is trading at less than 10 times forward earnings, which is much cheaper than the S&P 500‘s forward earnings multiple of 22. As such, Micron is a growth stock that’s still trading at an attractive valuation, giving investors a reason to buy it going into its next earnings report.

Discounted offers are only available to new members. Stock Advisor will renew at the then current list price. Stock Advisor list price is $199 per year.
Stock Advisor launched in February of 2002. Returns as of 12/20/2021.
Average returns of all recommendations since inception. Cost basis and return based on previous market day close.

My Wife Changed Names On All Our Property Documents In Nigeria To Hers, Plans To Kill Me To Take Over All I Own— Italy-based Man – SaharaReporters.com

Author attempts suicide after being duped $140000 by Facebook girlfriend – Vanguard

Author attempts suicide after being duped $140000 by Facebook girlfriend – Vanguard

'Liars and lawbreakers': what the papers say about Johnson's Partygate fine – The Guardian